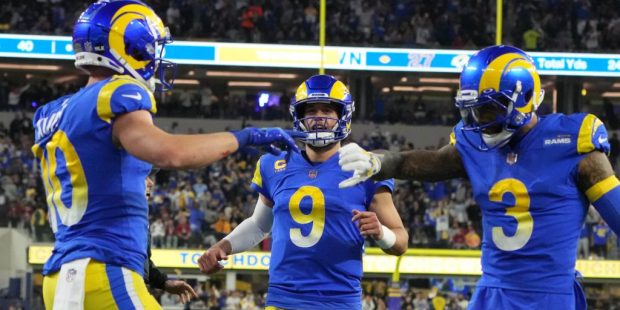 The Los Angeles Rams meet the Cincinnati Bengals in their home building of SoFi Stadium Sunday for Super Bowl 56. Kickoff is scheduled for 6:30 p.m. ET. Below, we look at the Rams vs. Bengals Super Bowl first-half total with  NFL picks and predictions.

L.A. advanced to its second Super Bowl in the last four seasons by hammering the Cardinals 34-11 in the Wild Card Round, upsetting the defending champion Buccaneers 30-27 in the Divisional Round and beating the Niners 20-17 in the NFC title game.

Cincy returns to the Big Game for the third time in franchise history, but the last trip was in 1989 – they lost both games to a Joe Montana-led 49ers squad.

They made it to this one after beating the Raiders 26-19 in a Wild Card tilt, upsetting the AFC’s top-seeded Titans 19-16 in the Divisional Round and stunning the second-seeded Chiefs 27-24 in K.C. in the conference championship.

L.A. put up one of the biggest offensive duds in Super Bowl history when the Rams and head coach Sean McVay (aka the Boy Genius) were embarrassed 13-3 by the Patriots in Super Bowl 53.

But McVay should have learned from that performance and there’s no way this Cincy coaching staff can devise as good of a defensive game plan as New England’s did in 2019.

McVay knows Cincy will be in serious trouble if it has to come from behind since the Rams have one of the best pass rushes (DE Aaron Donald) in the league and the Bengals have struggled in pass protection.

In fact, Cincy QB Joe Burrow was sacked 9 times versus Tennessee in the AFC Divisional Round. The Rams and McVay will harness their nervous energy and go all out on the Bengals in the first half.

Let’s Make This Interesting – Place your legal sports bets online in New Jersey and Colorado with Tipico Sportsbook, a trusted, global sports-betting leader. Iowa, get ready, Tipico is coming to your state soon!

Also, much to my surprise, Cincy’s 10.6% return on investment on first-half Overs is the biggest in the NFL as the Bengals are 11-8-1 O/U in first halves this season, according to EVAnalytics.com.

Cincy goes Over the first-half total at the highest rate despite playing the third-slowest pace in the NFL. Plus, L.A. plays the fourth-fastest neutral situation pace, which further supports my previous point that the Rams will try to get out to a fast start.

While I give L.A.’s offense the edge in this matchup, Cincy’s offense is obviously potent and Burrow and Co. certainly have the talent to get into a shootout.

Furthermore, several NFL gambling podcasts and shows have touted the Under 23.5 (-105) first-half total for this Super Bowl, so it might end up as a quasi-popular betting derivative.

However, that pick seems somewhat lazy. Betting the first-half Under in NFL prime-time games was a very profitable system a few seasons ago.

The market is clinging to this outdated betting system and the oddsmakers are laying a trap by making the first-half Under cheaper.

Want action on any of today’s top sports games? Take your game to Tipico Sportsbook, a global sports betting leader.