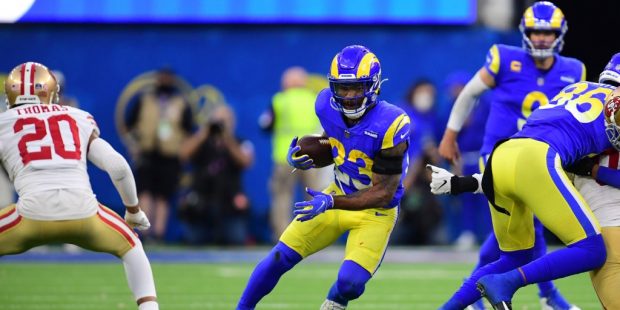 Super Bowl 56 kicks off Sunday at 6:30 p.m. ET when the Cincinnati Bengals face the Los Angeles Rams at SoFi Stadium in L.A. It’s a borderline miracle second-yard Rams RB Cam Akers is even able to play in the Super Bowl.

Akers tore his Achilles during this past offseason and it’s almost unthinkable for an athlete to return from an Achilles tear midseason. But Akers defied the odds and made his season debut in L.A.’s regular-season finale against the San Francisco 49ers. Below, we look at Cam Akers’ Super Bowl prop bets with  NFL picks and predictions.

The three reasons for liking the Under in Akers’ rushing props are Akers’ limited effectiveness in his four games this season, Rams’ second-string RB Sony Michel’s‘ experience in the Big Game and the return of RB Darrell Henderson.

Since returning to action, Akers hasn’t rushed for more than 55 yards in any of his four games and is gaining just 2.6 yards per carry (154 rushing yards on 59 attempts).

Also, Akers had his workload reduced in the NFC title game after two costly fumbles in L.A.’s 30-27 victory over the Buccaneers in the NFC Divisional Round. Akers went from 24 carries versus Tampa Bay to just 13 carries against San Francisco.

Furthermore, Rams head coach Sean McVay announced earlier this week that Henderson would be active in the Super Bowl, saying: “I think Darrell’s going to go. So, you’ll have Cam, Darrell and Sony. You’ll be able to see a good, three-back rotation, based on how the game unfolds.”

Not only has Akers shown ball-security issues and hasn’t done much on the ground, but Michael and Henderson both average more yards per carry than Akers. In fact, Henderson has the seventh-best success rate for running backs in the NFL.

Combine these things with Michel having already played in and won a Super Bowl with the New England Patriots, Akers should get less opportunity.

All the logic written above applies to this prop as well. I’m splitting a full unit amongst both Akers’ rushing props because they both have a similar likelihood of cashing.

If the Rams are up in the fourth quarter, I’d expect them to use Michel or Henderson since they are more effective and Akers fumbled twice this postseason.

Let’s Make This Interesting – Place your legal sports bets online in New Jersey and Colorado with Tipico Sportsbook, a trusted, global sports-betting leader. Iowa, get ready, Tipico is coming to your state soon!

While Akers hasn’t been as effective running the ball as Michel or Henderson, Akers is the best pass-catching threat in L.A.’s backfield. Akers has gone Over 16.5 receiving yards in two of his three playoff games.

On top of that, Cincy’s defense has allowed the fourth-most pass targets to running backs during the regular season and the fifth-most receptions.

Want action on any of today’s top sports games? Take your game to Tipico Sportsbook, a global sports betting leader.