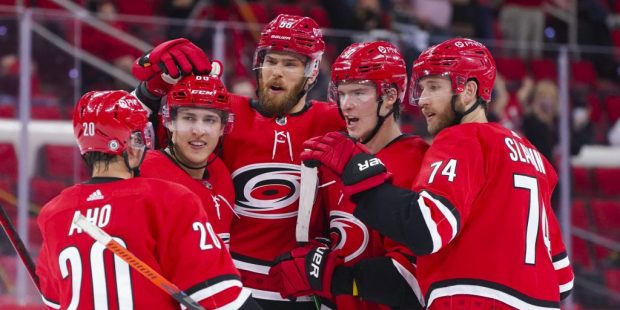 The Carolina Hurricanes (34-11-4) travel to meet the Philadelphia Flyers (15-25-9) Monday at Wells Fargo Center. Puck drop is scheduled for 3 p.m. ET (ESPN+). Below, we look at the Hurricanes vs. Flyers odds and lines, and make our expert NHL picks, predictions and bets.

The Hurricanes held on for a 4-3 matinee road win against the Pittsburgh Penguins Sunday as the Over connected. Carolina topped the Flyers 6-3 in Philadelphia, Nov. 26, in the most recent meeting.

The Flyers were dropped 5-3 at home against the Washington Capitals last time out Thursday. Philadelphia has dropped four straight games (0-3-1) since its last victory Feb. 1 against the Winnipeg Jets. The last win for the Flyers against an Eastern Conference team was Dec. 18 against the Ottawa Senators.

Anderson stopped 28 of the 31 shots he faced in Friday’s victory against the Nashville Predators. He was rested Sunday, as Antti Raanta picked up the win to kick off the Keystone State back-to-back.

Hart hasn’t won in the past three starts, going 0-2-1 while allowing three or more goals in each contest. He was in between the pipes Nov. 12 for the team’s 2-1 road victory against the Hurricanes in the first meeting of the season.

The Hurricanes (-205) will cost you over two times your potential return, and that’s a little on the steep side. Carolina is playing the second end of a back-to-back. The Hurricanes are 1-4 in the past five when playing on no rest. While the Flyers are a dismal 3-23 in the previous 26 against Eastern Conference foes, the risk is still too great for very little reward.

The HURRICANES -1.5 (+122) at plus-money is a lot better of a play, even in the second end of a back-to-back set. Carolina is 12-4 in the past 16 as a road favorite, and 20-9 in the past 29 games against teams with a losing record. Don’t get carried away, though, as just two of the previous seven wins for the Hurricanes have been by two more goals.