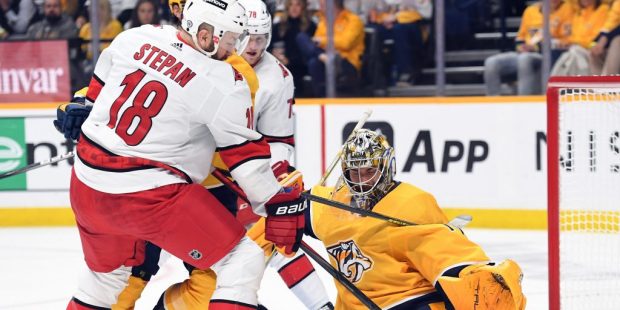 The Nashville Predators (28-17-4) travel to meet the Carolina Hurricanes (32-11-4) Friday at PNC Arena in Raleigh, N.C. Puck drop is scheduled for 7 p.m. ET. Below, we look at the Predators vs. Hurricanes odds and lines, and make our expert NHL picks, predictions and bets.

The Predators limp in on a three-game losing skid, including a 4-1 home beatdown at the hands of the Washington Capitals last time out Tuesday. Nashville has lost four of its last five versus Eastern Conference clubs (1-2-2).

The Hurricanes were dropped 3-2 in overtime by the Florida Panthers Wednesday in a very entertaining game. Carolina blew a 2-1 lead late with an extra attacker on for Florida and then allowed a quick goal in OT. Carolina has won five of its last six against Western Conference teams.

Saros has been on the short end of three starts since the All-Star break, allowing 11 total goals on 96 shots. He has yielded at least 3 goals in each of the outings. The Finnish netminder allowed 2 goals on 31 shots in a 3-2 loss in Nashville against Carolina Oct. 16.

Andersen has failed to record a win in each of the past two outings, just the second time this season he has lost two or more consecutive starts. In the previous occurrence, he had a three-game losing skid from Nov. 24-30. The Great Dane was the goalie of record in Nashville Oct. 16, posting 38 saves on 40 shots in a win.

The Hurricanes (-175) are just a little too pricey, even on home ice, as they’re just 1-2-2 across their last five outings.

AVOID, and look to the puck line instead.

The HURRICANES -1.5 (+145) are a better value on the puck line as they try to rebound from a disappointing 3-2 OT loss against Florida Wednesday.

Carolina hasn’t been ticking off wins on the regular of late, but neither has Nashville. The Preds have dropped four in a row against winning teams, and are just 3-13 in the previous 16 skates in Raleigh. The home team is 11-2 in the past 13 meetings, too.

UNDER 5.5 (+110) is the lean here, even though Saros and the Predators have been getting knocked around pretty good of late. The Hurricanes have had some issues putting the puck in the back of the net lately, going for 3 or fewer goals in seven of their last eight outings.

The Under is also 6-1-1 in the previous eight meetings in North Carolina.