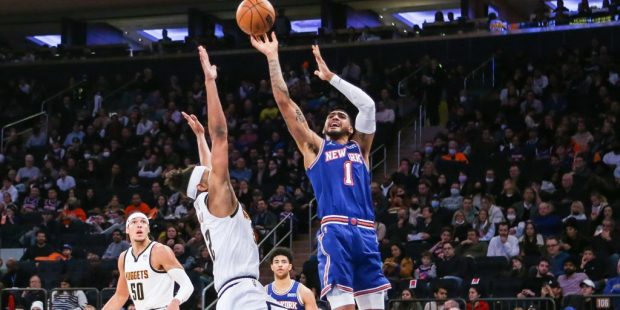 The New York Knicks (24-30) play the third stop of a five-game road trip Tuesday when they take on the Denver Nuggets (29-24). Tip-off is 9 p.m. ET at Ball Arena. Below, we look at the Knicks vs. Nuggets odds and lines, and make our expert NBA picks, predictions and bets.

The Knicks have lost the first two games of their road trip and are coming off a 113-104 loss to the Utah Jazz Monday. They have lost three games in a row overall and have only two wins in their last 11 contests. New York is in 12th place in the Eastern Conference.

The Nuggets snapped a three-game losing skid with a 124-104 home win over the Brooklyn Nets Sunday. They had won five games in a row prior to the three-game slide, so they have won six of their last nine games overall. Denver is in sixth place in the Western Conference.

The Knicks are 11-15 on the road this season and have dropped five straight, and eight of nine, away from MSG. They are 3-4 this season with no rest.

I don’t like the Knicks in this spot and the -340 line on Denver makes for a  PASS on the money line as you would have to wager more than three times your potential return. Look to the spread at the total for better bets.

The Knicks are 5-2 ATS this season when they play on the second night of a back-to-back and are 6-4 ATS on the road against teams above .500. New York is 4-6 ATS in its last 10 games but has failed to cover the spread in five of its last six outings.

The Nuggets are 7-7 ATS at home against teams below .500. Denver has covered the spread in four of its last six games but those are only four it has covered in its last 10 outings.

The Knicks have only had two games hit the Over in the seven games they’ve played on no rest. They have one of the slowest paces in the league and are 27th in the league in scoring with 104.4 points per game.

The Nuggets are averaging 112 points in their last four contests.

The Over hit in their first meeting as the teams put up 212 points against a 209.5 total.