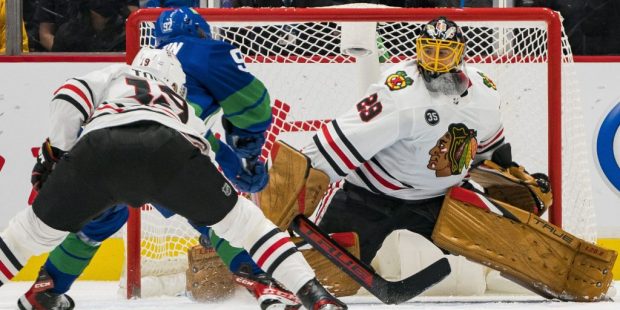 The Vancouver Canucks (19-19-6) travel to meet the Chicago Blackhawks (16-21-7) Monday at United Center. Puck drop is scheduled for 7:30 p.m. ET. Below, we look at the Canucks vs. Blackhawks odds and lines, and make our expert NHL picks, predictions and bets.

The Canucks dropped a heartbreaker at Calgary in overtime by a 1-0 score Saturday. While Vancouver has lost just once in regulation in its last seven outings, the Canucks have won just once in the past five games, too.

The Blackhawks were on the short end of a 6-4 home loss against the Colorado Avalanche last time out Friday. Chicago has posted a 1-3-2 mark across its last six outings. Chicago lost the first meeting between the clubs 4-1 at home Oct. 21 and picked up a 1-0 victory in Vancouver Nov. 21 in the most recent matchup.

Demko has been red-hot lately, going 2-0-1 across his last three outings while coughing up just 4 total goals on 97 shots. All three of those impressive showings have come on the road.

Fleury has been knocked around for 15 total goals on 100 shots in his last four outings, going 1-3-0. One of his three shutouts came Nov. 21 in Vancouver.

The BLACKHAWKS (-105) are a decent play at home behind Fleury, who shut the Canucks down last time they met. Neither of these teams is playing very well lately, so back the home side despite the fact the Blackhawks are just 3-9 in the past 12 tries against the Canucks.

The Alternate Spread Canucks +1.5 (-340) will cost you more than three times your potential return, and there just is no way to justify that kind of risk for such a little reward. If you like Vancouver just play them straight up.

UNDER 5.5 (-102) is the lean, not only because these teams totaled just one goal in the meeting back in late November, but because these sides have each been struggling to light the lamp.

The Under is 5-1 in the past six games for Vancouver and is 5-1 in its last six on one days rest. The Under is also 3-1-1 in the last five against teams with a losing overall record for the Blackhawks.